Let’s take a closer look at the history of home heating systems, to get a better idea of how people have been warming their homes since the first cities.

‘If it ain’t broke, don’t fix it.’ How does this relate to ancient home heating technology? One word: fireplaces. Stretching as far back as 2500 BCE, central hearths have been unearthed in Ancient Greece, showing that people have been using one of humanity’s first inventions (fire) to warm their homes.

Ancient furnace technology looks similar to types of home heating we see today including modern wood-burning fireplaces, cooking stoves re-appropriated for heating, and even underfloor home heating systems. These early furnaces used stone, but as new building materials evolved, like iron, they were applied to the construction of medieval and more modern furnaces. Medieval furnaces, with improvements in technology such as chimneys and flues, came onto the scene as humanity left the Dark Ages for the Renaissance, during the 15th century.

Since the furnace’s humble beginnings, there have been many technological improvements that have brought us to the heating capabilities of today. For example, the use and understanding of chimneys and flues took off in the 14th century, diverting smoke away from living areas, and keeping people from choking on harsh smoke. Steam heating was an industrial age revolution that allowed households to utilize the unique heating properties of superheated water, instead of simply using fire on its own.

Beginning in the mid-19th century, boilers and fans were additional ways to create and disseminate heat in homes. Finally, the all-powerful thermostat, invented in the late 19th century became the remote control to our furnace’s television.

2000s: Washington Energy Services is here for you

Lucky for you, you no longer need an Ancient Athenian lighting a fire beneath your floorboards to ensure warmth for you and your family. If you’re looking for a new furnace for your home, check out our great selection of Bryant Furnaces. Washington Energy Services is your top choice for heating and cooling solutions throughout Washington State, thanks to our reputation for the best products and exceptional customer service.

To start, let’s examine some similarities between heat pumps and air conditioners. Both systems are powered by outdoor units. They use the science of thermal energy to transfer heat in the air from one place to another. The units connect by a line-set charged with eco-friendly refrigerant to a coil that is placed above your furnace.

An air conditioning system, like your fridge, absorbs heat from air that passes over the coil, and the resulting cool air is moved into your ducts and through your home. The collected heat is expelled through an exhaust process. Okay, there’s more science than that, but you get the idea (or check out http://home.howstuffworks.com/ac.htm). There are room air conditioners that hang out your window and cool one room and air conditioning systems, aka central air, which is what we are comparing to heat pumps today.

The heat pump’s main advantage is it can cool and heat, so you can use it all year round. A heat pump pulls heat out of the outside air when it heats your home but can be reversed to pull heat out of your house and cool. In fact, our climate is one of the most efficient for heat pump operation. Heat pumps provide an economical source of heat (the air, it’s free!) down to freezing, when you’ll want to have a back up heating system kick in. If your home is currently heated by an inefficient heat source, for example oil, you’ll see much lower heating costs with a heat pump. The investment could pay for itself on the heating costs alone – and your air conditioning would be free! Our local Washington utilities offer rebates for heat pumps because of the real energy savings they provide. The heat pump is also one of the ‘greenest’ ways to heat and cool your home because it is powered off of renewable electricity.

But don’t count air conditioners out just yet! The largest advantage is an air conditioner will give you a cool, comfortable home in the summer with less upfront cost than a heat pump. If you already have an energy efficient way to heat your home, such as a high efficiency gas furnace, then perhaps a heat pump will not yield a high enough return on investment. Or, if space is an issue then an air conditioner may be the right choice as they are more compact and fit into tighter spaces.

There are also other options out there. Ductless heat pumps can provide super-efficient cooling and heating to homes with no or insufficient ductwork. A ductless heat pump can lower energy costs 25-40% when replacing electric baseboard heat. If you are an electrically heated home, chances are your utility is offering $800-$1200 rebates on these units. They are great for combined heating/cooling of the whole house or just for one room. Another option for a lot less money is a Solar Attic fan. These will use solar power to run a whole house fan. They don’t cool off the house per se, but pull the heat right out of the house and reduce upstairs temperatures but as much as eight degrees.

The important thing here is that you do not need to suffer through those hot summer nights and prices can be reasonable to cool down. Washington Energy Services’ home energy specialists can help you choose your best cooling option. Call 800-398-4663 or 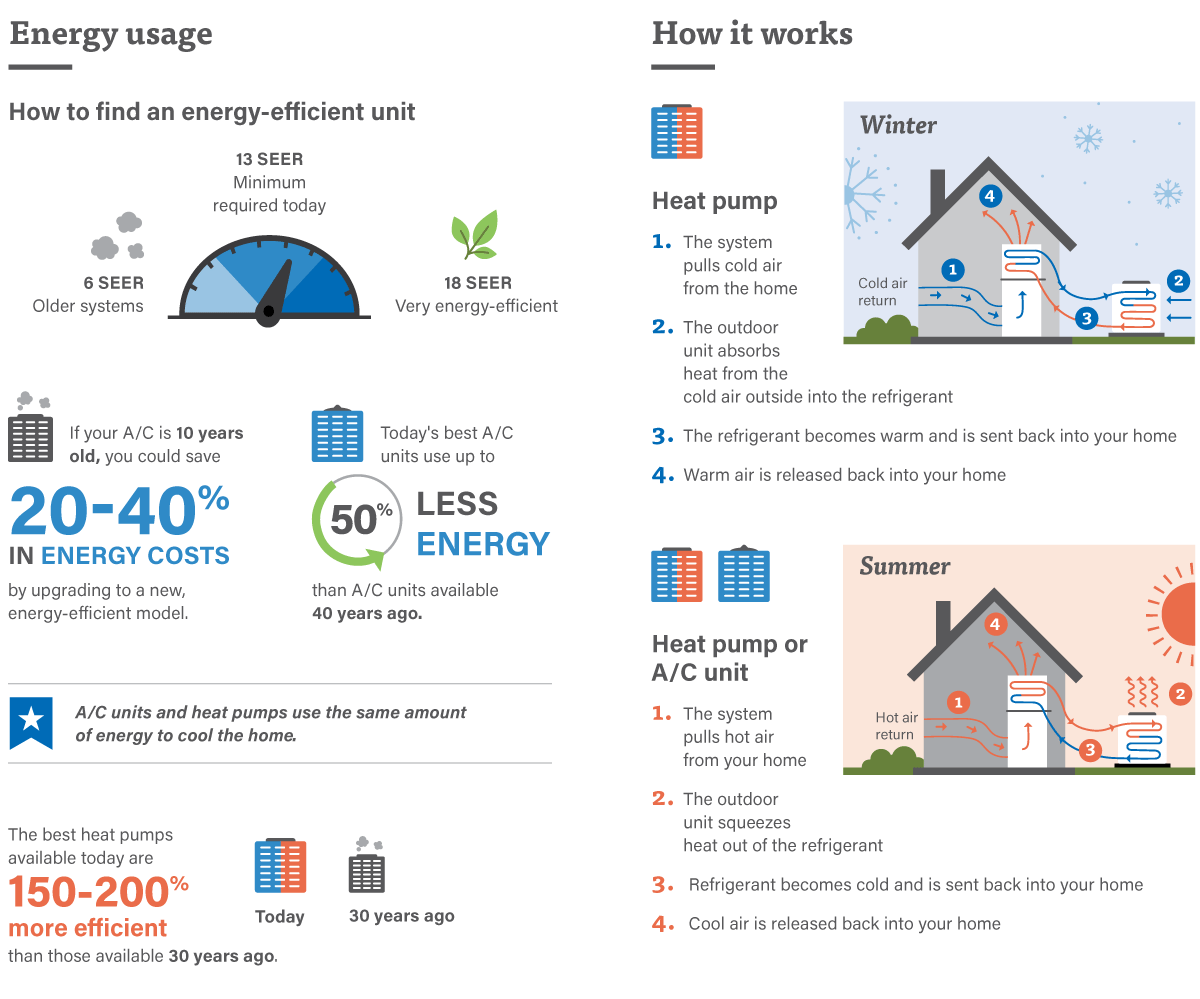 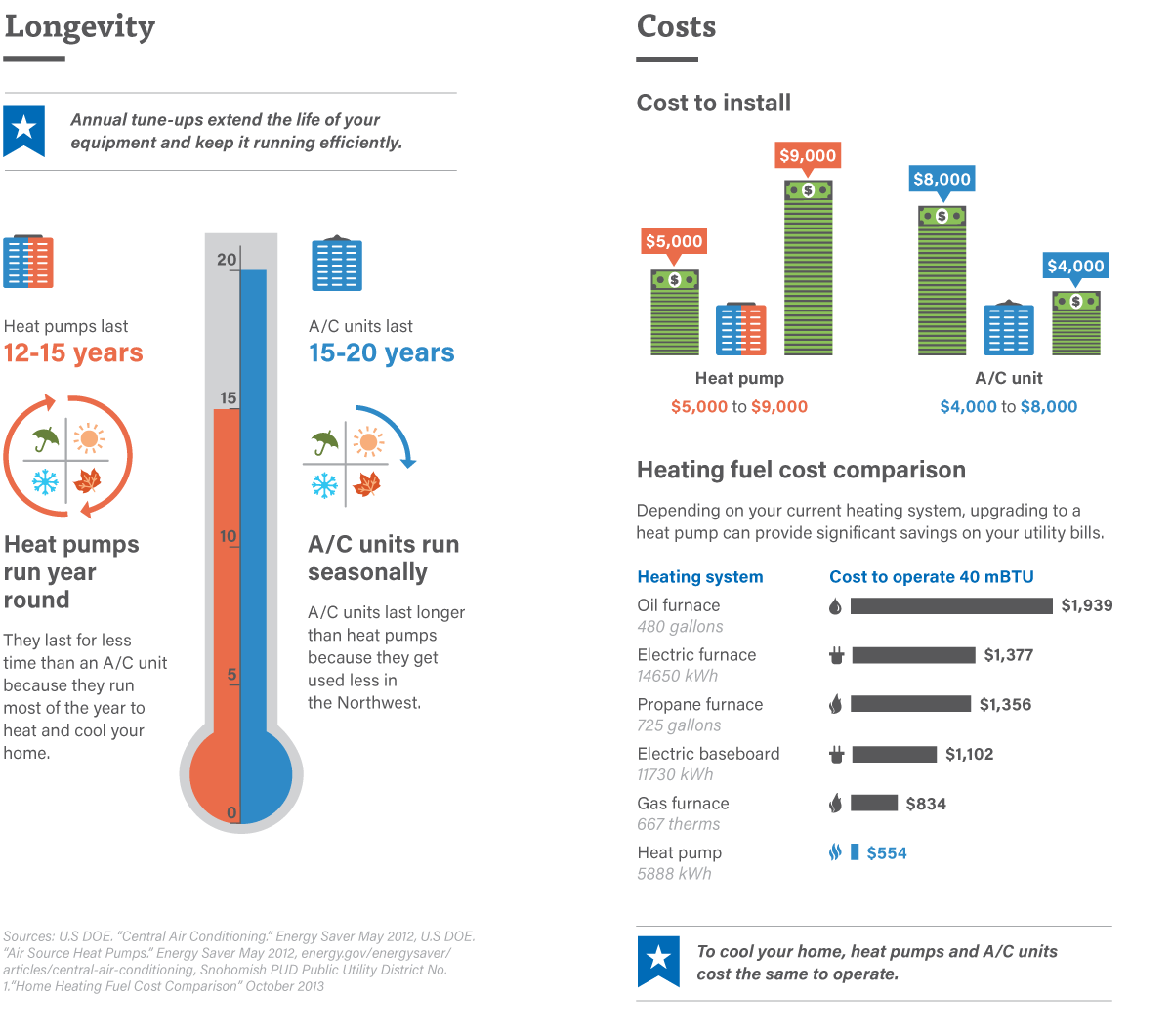