Update: We put the heat on HVAC scammers

Back in February, we alerted the Better Business Bureau (BBB) of some unsettling news we were hearing from our customers.

Someone out there was trying to take advantage of our good name to sell poor service and confuse the public. The BBB investigated further and issued this alert which reminds customers to only work with certified and experienced contractors (like Washington Energy Services).

The BBB serving Alaska, Oregon and Western Washington has uncovered a group of individuals claiming to be affiliated with local HVAC businesses. The schemers allegedly set up appointments with unsuspecting consumers, then pressure them into paying much more than quoted — often for shoddy work.

According to information provided to BBB, these impostors frequently change their names or use variations of legitimate businesses’ names. Some of the names reported to BBB include GFA Heating, Green Fresh Air Heating, Pacific Home Services and Home Services Inc.

It is unknown exactly how the schemers are acquiring consumers’ contact information, but legitimate local companies have assured BBB there is no data security issue.

A consumer from Bothell reported to BBB that he received an unsolicited phone call from GFA Heating & Cooling LLC for a $45 duct cleaning and a free dryer vent cleaning, and he agreed to the service. After the appointment, the company handed him a bill for $1,095.94. The consumer stated he then called four local duct cleaning companies to ask what a reasonable price is for this type of service. He said all four companies gave him a range of $575 or less.

“They all begged me to notify BBB because the service I got reflected badly on their whole industry,” the complainant explained to BBB. “Each company said that they would have given me a total estimate before starting.”

Similarly, a Seattle woman told BBB she was quoted $45 over the phone for duct cleaning and furnace inspection. When GFA Heating & Cooling LLC arrived, she says the company then changed its price to $1,300. She declined the service, but says she was still charged $45.

GFA Heating & Cooling LLC, which claims to be located in Renton, currently has an F rating with BBB. Since January, BBB has reached out to the company regarding complaints nine times via email and phone. However, only one complaint has been resolved; the others remain unresolved or unanswered.

Homeowners are not the only ones complaining; local businesses say they are also affected by this type of scheme.

Washington Energy Services, a BBB Accredited Business since 1989, reached out to BBB in February to express its concerns, even issuing a warning notice to its customers.


BBB urges consumers who receive solicitations for duct cleaning, dryer vent cleaning or HVAC services to do the following before inviting anyone into their homes: 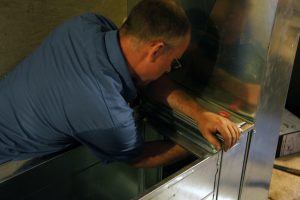 Signs of a failing HVAC system